Not So Fun Fundamentalism 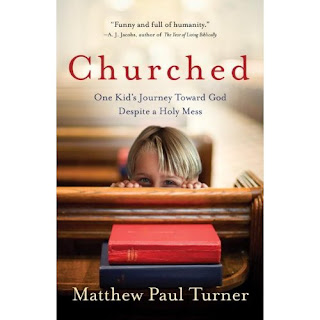 Have you ever wondered what it is like growing up in a fundamental, Independent Baptist Church? If you read Churched (WaterBrook Press, 2008) by Matthew Paul Turner, you'll get your answer.
Turner recounts many humorous incidents throughout his growing up years in Eastern Maryland. Most of the episodes focus on his time in the culture of fundamentalism. The themes focus on the traditional, outward acts that many fundamentalists confuse with true piety. Turner recounts many situations where he did not understand the reason behind specific behaviors and teachings, but instead simply focused on the outward acts (like repeatedly "asking Jesus into my heart" just in case).
Hell is a big theme in the book. One of my favorite passages tells of a Sunday School teacher burning a Barbie Doll's feet in order to show what Hell is like. As the Sunday School room filled with toxic smoke, all the kids scrambled out of the room.
Another favorite comes from part of a single sentence. Turner writes on page 149, "When Mrs. Snover (another Sunday School teacher) finished teaching us about Jesus' miracle of turning water into Welch's grape juice..." Priceless.
Although the book is a quick and funny read, it is also serious and somewhat sad in its message. As I was reading along, the thought struck me that Jesus was hardly mentioned in the book at all. I found out why toward the conclusion. Turner writes on page 213, "Fundamentalism has little to do with Jesus." This is the crux of the book. Turner's stories show that fundamentalism focuses on outward acts of separation from the world that give a message of works-based righteousness.
The only problem I had with Churched was that Turner lumps some things in with fundamentalism that do not belong. An example of this is the infallibility if scripture.
In the end, this book is a good read. Not only is it enjoyable and well-written, but it acts as a good warning to all of us to watch out for falling into the trap of works-based righteousness.
While fundamentalism has little to do with Jesus, biblical Christianity is all about Him.
(I received this book for free through the WaterBrook/Multnomah Blogging for Books program.)

Simply too far away for me to remember my own SS days, but I do remember having to correct some of the things my children were taught, such as the children were warned about the large super computer installed in Switzerland about 1976 (if my memory serves me well) was the beast of Revelation.

Sunday School is one of those traditions that has incredible staying power. Too bad it often does more damage than good.

This reminded me of a story i heard from a brother who had come out of a KJ only independent Baptist church where the pastor taught that televisions were evil and must be destroyed. After he left the church, he was sitting down watching TV and saw a commercial where his pastor was advertising for his used car lot. Romans 2 comes to mind

Ahhh legalism - good for others but not for ourselves. At least that's how it usually works.

The only problem I had with Churched was that Turner lumps some things in with fundamentalism that do not belong. An example of this is the infallibility if scripture.

I agree. That is a significant problem. Too many seem to be ditching important, biblical beliefs and practices in order to be "authentic." This should be a warning to all of us.

"While fundamentalism has little to do with Jesus.."

Fundamentalism has to do with many very different kinds and brands of churches, most of which have lots to do with Jesus. The reason this whole movement started back in the 40's was many saints recognizing their baptist denomination was going severely liberal - meaning they were throwing out most of scripture as mere allegory. They gave up denominationalism and started associations of churches for far less top-down control.

Unfortunately they did not throw out institutioanlism and it's local top-down control. You are actually more of a fundamentalist than your for-fathers because you are throwing out habits said to be fundamental that are not even close. You want to stick to fundamentals even more. God bless those saints for what they did in the past. Lord have mercy on the "spots and wrinkles" they failed to clean and iron out. By God's grace, we have heard His voice calling us out of the camp to a greater understanding of what matters to Jesus. Pray for them, don't exaggerate their failures.

Holding a flame to Barbies feet... wow that is a life simulation of hell. I'll have to try that one. I'll have to find a Barbie because I only had boys.

If "fundamentalism" means being biblical, then I'm all for it. When it goes beyond the bounds of scripture into legalism, then there's an obvious problem. The trouble for most of us is those nasty gray areas where it can be difficult to tell the difference between the two.