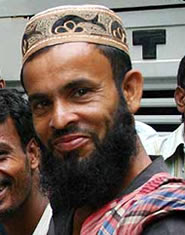 On my blog sidebar I have a widget from Joshua Project that shows an Unreached People of the Day. The man in the photo to the left represents the Shaikh of Bangladesh - today's unreached people group.
The Shaikh are a predominantly Islamic people who speak Bengali. They are also a large group: almost 133,000,000 people. Most distressingly, according to Joshua Project, the Shaikh are 0.00% evangelical Christian.
0.00%
I hope we take some time to think about this. This people group, which is well over 1/3 as populous as the entire USA, has no significant Christian population whatsoever. If we believe in a real place called Hell, then statistics like this ought to be chilling to us.
I don't write this post to guilt anyone. Rather, I hope simply to help everyone remember just how serious the need for international missionaries is. For people groups like the Shaikh, if they have no significant Christian population among them, then who is sharing the gospel? How can they hear the good news?
Let us do all we can to support international missionaries. Let's work beyond the confines of denominational lines to get the gospel message to all the nations. Let's remember that many peoples still haven't heard the news that so many of us deeply cherish.
For more specific information on the Shaikh, click here.

Thank you for this post... a quick question that I have wanted to ask you... Is there a mission organization that you recommend? Or a missionary that you know personally that we could support directly?

If we want to follow the biblical model, then we will support missionaries directly instead of sending money to big agencies (although the second option is not necessarily a bad thing). I've been thinking about this a lot lately. When we start meeting with other believers in our home, we want to talk about this and decide together who we should support.

We do know a number of missionaries, but most of them are already supported through the International Mission Board.

Here's an idea: on my sidebar I'm linked to a man named Dave Black. He is a professor at my seminary. He and his wife do missions work in Ethiopia. Take a look at his site. He doesn't ask for money, but you may feel led to donate anyway.

So what do you think happens to these people when they go before the throne of God?

What will God say, if they respond that they have never heard of Jesus?

Is there an alternative plan?

If they all go to hell, whose fault is it?

You've asked four questions. I'm not sure if you want an answer to all of them, but I'll go ahead anyway.

1. If they are not in Christ, they will be condemned to Hell.

2. They are guilty because they know that there is a God and they have rejected Him (Rom. 1-2).

4. It is their fault because they have rebelled against God.

For us, the issue is obedience. Ultimately, God is sovereign over salvation and man is responsible to repent and believe.

You point out that there are places in the world which have never been evangelised. Therefore according to conventional church thought 99.99999% of that population is destined for hell. Conventional teaching also leads to the logic that heaven will be largely populated by WASPS, white anglo saxon protestants.

Its interesting that the Muslim theology will produce the same effect for them. 99.999999% of their paradise will be Arab. mmmmm!

Having challenged you on some of your other excellent posts, I am also calling into question the standard doctrines of salvation. I believe that the church has perpetuated a myth for long enough.

I believe in a just and merciful God. He doesn't base our eternity on the zip/post code lottery. I have long watched this from a scriptural perspective, but examples may better illustrate it.

(To be very clear, I absolutely confess that there is salvation in no other name than Jesus.)

I was born again as a child, alone, in my bedroom. Just me and God. I didn't have Christian family, nor did we go to church. One day I just got out of bed and knelt on the floor and said to God, "please don't forget me". Looking back, I felt the powerful presence of the Holy Spirit as I prayed.

Later on in my teen years in the sixties I had a deeper revelation descend over me. I happened to be outside of a church and God plainly said to me that He did not live in that church, but he lived in my heart. He also said that heaven had nothing to do with my goodness, but that HE had made a way. I had no idea that it was biblical.
Later in my mid twenties at college when the Godsquad collared me, I rejected them because I thought them be cultish. Then God showed me that the Jesus they were talking about was the God I already knew!

My wife had a similar experience. As a three year old she had revelations and visions of the heavenly city. She met God and walked with him. Again she had no earthly knowledge of such things and had no Christian family.
When she was given a bible to read as a teen she found clear descriptions of what she had already experienced. She joined the church and became a "christian".

This is the experience of many I meet.