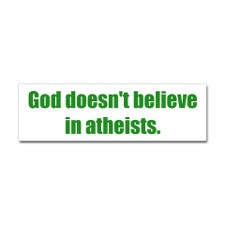 I recently saw this bumper sticker on the back of a car. I know that it is nothing new, but it got me thinking (and chuckling).

First of all, the statement on the bumper sticker is true. We know this from Romans 1:18-20:

"For the wrath of God is revealed from heaven against all ungodliness and unrighteousness of men, who suppress the truth in unrighteousness, because what may be known of God is manifest in them, for God has shown it to them. For since the creation of the world His invisible attributes are clearly seen, being understood by the things that are made, even His eternal power and Godhead, so that they are without excuse."

Second, atheism is an intellectually illogical position to hold. The reason for this is that only an all-powerful, omniscient, omnipresent being could know for certain that God does not exist. Simply put, only God could know without a doubt that there is no God. However, God can certainly know that atheists do not exist. He knows this because He has made Himself obvious to them, so much so that they are without excuse.

Third, I wonder why we Christians so often get angry at atheists. If we really believe that we are saved only by the grace of God, then why do we get so upset when people who do not know God claim that He doesn't exist? Just because they deny the existence of God, this does not make it true. They have not (yet, we hope) been saved by God's grace. Instead of being so angry, why not love them?

Fourth, although no atheists actually exist, there are still plenty of people out there who either deny God's existence or just don't care about Him. If we approach people like this by trying to argue them into the kingdom, it is not going to work no matter how solid our arguments are. Instead, we should try loving and serving them. This kind of behavior is (sadly) shocking to them because they are usually shunned by Christians.

So, even though there are no real atheists, let's love and serve them anyway. Some might actually respond by listening and eventually believing.

Atheists believe in a god who doesn't exist!

Why do you assume there is only 1 god though - a "God" in the singular to whom you refer? Isn't that just as presumptuous as being certain that there is no god?

"But," you might say, "I believe there is a God wholeheartedly." Which, you know, is fine. But a belief is not absolute knowledge.

Atheists believe that there is no God, just as you believe there is a god. We are not claiming absolute knowledge, we are simply making a judgment based on the evidence presented to us.

Similarly, while you believe in the Christian God, you obviously do not believe in the Islamic Allah or the Jewish version of God, and probably not Papua New Guinean mud god, Pikkiwoki or any of the other cultural Gods. But, using your own argument, only an all-knowing being, such as any one of these Gods, can know for certain that they do not exist, so you therefore believe in all of them, even if you reject them.

Think before you post poorly presented and tired out arguments next time, yeah?