No Beer Before Noon 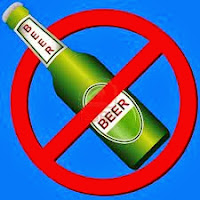 On Sunday mornings we frequently drive to friends' homes to gather as the body of Christ. While on the way, our family usually stops at a nearby convenience mart for drinks. For me it's almost always a Coke (hey, I live in Georgia).

A few Sundays ago as I was getting a Coke out of a refrigerator I noticed something odd. The coolers nearby that contain the beer were locked. Specifically, some sort of rod was placed across the handles to keep the coolers closed. No one was allowed to buy alcohol at that time. When I've gone in that store at other times of the week the coolers have appeared to be open (nothing blocking them).

I asked at the counter about this. In our county no alcohol can be bought between midnight and noon on Sundays. Any other day of the week is fine, just not Sundays.

This particular law is one of those blue laws that I'm still amazed exists in the USA. This law is based on the mistaken idea that people should not be drinking, but instead should be in church on Sunday morning. Remember that I live in the Bible Belt.

Laws of this type are a last holdover of Christendom. They are an attempt by some to impose their own Christian-ish morality upon secular society. The intent is to force unbelievers to act like believers (as if buying alcohol or attending worship services has anything to do with biblical Christianity anyway).

As followers of Christ, we are not called to fight culture wars. Jesus never expected the secular world to act like members of his kingdom. Instead, Christ desires people who will give all to follow him. Culture is changed one person at a time through the gospel of Christ. It is gospel, not law, that saves.

Thanks Norm. I hope all is well with your TDY.

I encountered this in Arizona once during spring training. I went to a 12 noon baseball game on a Sunday, and about 5 minutes before the game I went to the beer stand. The vendor was standing there and asked if he could help me. I asked for a beer. He told me he couldn't do that. "Huh?," I asked. When I asked why, he said that there was no beer sales before noon. So he made me wait 5 minutes. I missed the first pitch.

You should have been in church for those five minutes. Man, you missed the altar call!