One Thing I Don't Respect About Roman Catholicism 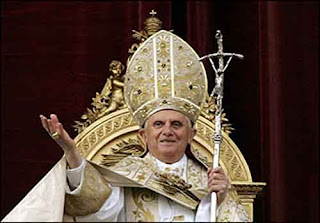 In my previous post I wrote about respecting Roman Catholicism for honesty about its sources of authority: both scripture and tradition.

In fairness, I think I should mention something that I don't respect about Roman Catholicism. That thing is the tendency to allow tradition to trump scripture in various church beliefs and practices. Frankly, it doesn't bother me when Catholics (or anyone else for that matter) do things according to tradition when these things do not violate scripture. The problem rises when the traditions transgress in some way what scripture teaches/shows us.

I've included a photo of the pope for a reason. The Roman Catholic tradition of having a pope flies in the face of all scriptural evidence. The bible nowhere at all in any way whatsoever suggests that one man is the head of the church (other than Jesus Christ of course). Nowhere in scripture is there any hint that the Bishop of Rome will be the leader of the church. There is no "Vicar of Christ." To suggest that the apostle Peter was the first pope strains biblical interpretation to an absurd degree.

I've met many Catholics in my life. Their thoughts about and attitudes toward the pope ran a wide spectrum. Regardless, they still admitted that he is the head of the church.

This is a tradition that plainly violates what we see in the bible. Scripture tells us that Christ is the head. We are all equals within his body. There is no hierarchy. Those who are elders are called upon to lead in living Christlike lives for all of us to emulate. To be great in the church is to be a servant.

Within Roman beliefs and practices, there are many that violate scripture. There is of course the pope. Other violations include the Mass/Eucharist, the Vatican, Cardinals, priests, nuns, monks, Lent, infant baptism, penance, confirmation, holy orders, extreme unction, confession to priests, veneration of the saints, praying to saints, and various beliefs about Mary such as her being the queen of heaven, a perpetual virgin, and the co-redemptress who ascended into heaven. Not all Catholics believe and/or practice all these things. However, they are very common within the Catholic church.

All of the above stem directly from allowing tradition to trump the bible in belief and practice.

My purpose in this post is not to bash Roman Catholicism. Rather, it is to focus on the danger of allowing our traditions to reign supreme in decision making. We would all do well to examine ourselves to see where our own traditions, whatever they may be, violate what God has shown us in the bible.

Roman Catholics, along with many Protestants, still cling to the Old Covenant shadows.

I believe that neither group does so out of any sort of biblical conviction. Rather, they look for ways to legitimize their traditions. They always have to look to the Old Covenant to do so.

Exactly. Perhaps the result of an emphasis on reading the Old Testament as a series of stories rather than seeing them in the grand sweep of God's covenantal relationship with His people?

That's a good hypothesis. I don't have any better guess at it.

I wonder if the irony of the opulence ever registers when he looks at the simplicity of the symbol on top of his staff.

I'm glad you escaped too.

I don't think those in power tend to ever ask hard questions. The answers are too dangerous to the positions they enjoy.