One Thing I Respect About Roman Catholicism 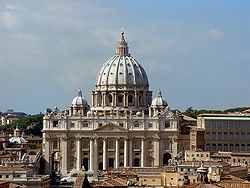 In a word the one thing I respect about Roman Catholicism is honesty.

I'm referring specifically to honesty as it relates to sources of authority for both belief and practice. Roman Catholicism has, at least since the Council of Trent, made it clear that both scripture and non-written tradition are legitimate sources of authority in what to believe and how to live this out.

Roman Catholics are honest about this. They do some things according to the bible, and other things according to their traditions. I realize that I'm speaking in generalities, but overall what I've stated is true. It is up to Catholics to determine what aspects of tradition and what parts of scripture to follow. When the two come in conflict, I'm not sure how they determine what to do. The popes past and present have dealt with many of these types of issues. Regardless, in the end Roman Catholicism is consistent and honest: both tradition and scripture are authorities.

(As a brief aside, I'm not suggesting that I agree with Rome in this; I'm simply stating that that Rome practices what it preaches.)

Now we turn to the broad segment of Christianity known as Protestantism. That's a big tent to be sure. However, a few things bind Protestants together. One of these is the declaration, like the Reformers, that scripture will be the highest authority in belief and practice (Sola Scriptura!). Some today go so far as to say that the bible is the only authority, but that's not what the Reformers thought. The key is that scripture takes the highest spot.

This is where most Protestants simply aren't honest. I'm not suggesting that Protestants are purposely lying, but rather that they have largely deceived themselves into thinking that they actually treat the bible as their highest authority.

Part of the difficulty is that Protestants in general actually are biblical about beliefs related to salvation. The gospel of grace, as taught in scripture, is well beloved and embraced by the vast majority of Protestantism.

However, and this is a big however, most Protestants do not actually adhere to scripture as their authority when it comes to church life. A cursory glance around American evangelicalism makes this fairly obvious.

Protestants would do well to do one of two things. Either they should embrace scripture as their highest authority for both salvation and the church, or they should be honest (like Rome is) and state that both bible and tradition determine why they do what they do. What we have today is a dishonest ignorance on the part of most Protestants.

Let's at least be honest. We all, even if we aren't part of the institutional church, still do many things because of man-created tradition. It's healthy to admit this. Then we have a decision to make. We can either change to conform to biblical teachings or we can stay as we are. Let's at least be honest and not delude ourselves.

Rome is honest about this issue. For this I respect them. What about the rest of us?

While I cannot claim to know all there is to know about the Orthodox Church, I do know that they rely on Scripture, the various Councils, and the Patriarchs as the source of their Liturgy and teachings.

The Church itself, can trace it's leadership back to the Apostles and began with the five ancient Patriachates of Rome, Constantinople, Alexandria, Antioch, and Jerusalem. (Between the 11th and 13th century, Rome separated itself from the others.)

Whether it is Greek Orthodox, Russian Orthodox, Antiochian Orthodox, or Orthodox Church in America (OCA), they all believe and teach the same thing. (They are "flavors" of the same church.)

Since the Roman Catholic Church began as part of what is now the Orthodox Church, and left for doctrinal and tradition reasons (Filioque & Pope), it would seem that Orthodoxy would serve as a better example of an honest church.

Thanks for adding that. I agree with you about consistency in Orthodoxy as it relates to authority. I focused mainly on Catholicism because of its more prevalent status in this country. I appreciate your input.

One way that Orthodoxy shows consistency is that they immerse their infants in water (not sprinkling). Also, they give them a drop of wine on the tongue. I'm not saying I agree with these practices, but they are consistent.